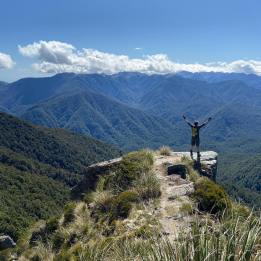 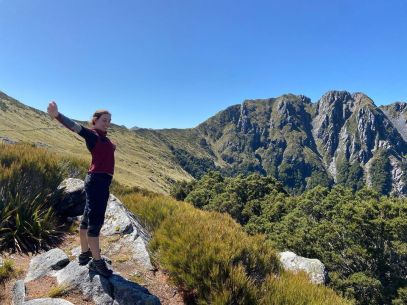 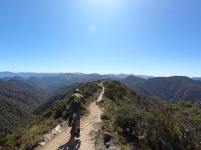 Some sections utilize old mining tracks built in the late 1800s while others are carved (shallowly) into the side of the mountain peaks by expert trail builders with a what we think must of had some next level crazy imagination for the possible. It’s so incredible that the trail builders even wrote a book about how they did it – Spirit to the Stone by Marion Boatwright!

The first two days were a long relentless rail-trail climb to Heavens Door and then along a loose rocky path carved on the side of a ridge with a sheer drop. The 1400m ascent made us the most humble of bikers but finished off with an incredible surprise of the amazing Ghost Lake hut to share with our new riding and hiking friends.

The intense “Expert Level” scary-trying-not-to-poop-myself third day involved some steep practically vertical rocky, rooty downhill (on our heavy fully-loaded bikes) then a sharp up onto the skinniest mountain ridge that I could have only dreamed about before seeing it with my own eyes. It also induced multiple ‘I didn’t realised I was scared of heights until RIGHT NOW’ moments. It would of been a flowy ride on Skyline Ridge if we weren’t so sure that at any fleeting moment away from concentration would of involved one of us falling into an abyss (and utilising one of the many helicopter pads strategically built on sections of the track probably to retrieve our mangled and strewn body parts).  To get down from Skyline Ridge we were asking the mountains: What kind of sicko puts 300 steep skinny arse stairs right in the middle of a already-expert level track!?! Maybe Old Ghost Road is looking for some new ghosts? Is that what’s going on here? When we arrived to the next hut at 2pm we were so full of adrenaline and smiles that we decided to continue on rather than rest. Soon we were climbing from green forest up to out in the open on ascending switchbacks called “The Boneyard” that was a Mars-style landscape with a skinny track weaving around large fallen rocks and passed a sign warning us “no lingering” due to potential rockfall. The downhill after the Boneyard was surprising (due to us reading the map wrong) and therefore the best downhill we had ever experienced. We were rewarded greatly with long flowy smooth runs all the way to Goat Creek Hut, one of the oldest Backcountry huts in New Zealand.

The next morning, we rode above the Mokihinui River towards the finish line across 21 bridges, over multiple waterfalls and along more cliff-hugging track passed sections called Suicide Slips 1, Suicide Slips 2 and when I mistakenly thought; I was all out of adrenaline, Suicide Slips 3. We were rewarded with views from above of water rapids, little inhabitable beaches, fallen bridges (after the 1929 earthquake), historic mining townsites (1800s), secret fairy-style forests and met millions of over-friendly sandflies.

We rode out and finished weirdly to clapping tourists and strangers taking photos which was unexpected and very nice. What a way to finish!

We spent about 50% of the time out in the mountains riding/carrying/walking with our bikes …or kinda half riding, half pushing ourselves along due to the tight turns and terrifying sheer drops on the side of the track. But our gear, our bikes and our bike bags worked really well the whole way.

…and the other 50% of the time spent eating all our snacks, talking about what’s for dinner, eating our dinner early, then eating our backup dinner, looking at the wild goats as if they were snacks, shooing away cheeky snack-stealing bush-chooks called Wekas or just being a snack for a million sandflies. We made heaps of friends from all around the world to share and compare snacks with.

How many days: 4ish days

Length: We rode about 120km over 4 days due to having to ride 18km to the beginning from a random bus stop in the middle of nowhere during a downpour and the other kilometers built up from our delirious mutual decision at the end of the track to just keep riding until we got to the ocean. But officially – it’s 85km and can be done in 2 to 5 days depending on how many snacks you can carry.

Accommodation: There are 5 star hiking-style timber huts with mattresses and cooking equipment overlooking some spectacular views along the way. You have to book in on the website but the price to do the trail remains the same regardless of how many huts you book and how many days on the trail. The first night at Lyell Campground (the starting point) requires a tent if it’s raining and also the sandflies are intense here. There is a little sandfly proof hut but it was packed by the time we got there. We bought a cheapy tent from Christchurch which we then offloaded to a very happy backpacker who was camping in a car. At the end just before Seddonville is a lodge called Rough and Tumble. This place was beautiful and built like an American Ski lodge with an outdoor shower overlooking the Mokihinui River. The lodge is managed by the Charitable Trust that operates The Old Ghost Road so we were more than happy to spend some coin there. The food is also amazing.

How to get there: Christchurch > Bus to Inanagua Junction (which is a T-intersection in the middle of nowhere by the way) > Ride 18km (a nice logging sealed road) to Lyell Campground. As for the track itself – it’s super easy and obvious to follow but the Trailforks App is a good backup.  On the other side – we took a bus from Seddonville to Westport and then a bus from Westport to Nelson.

Gear: We rode dual suspension bikes (with Scott lock out systems) due to (what turned out to be accurate and sometimes understated) stories of gnarly sections of trail and also because we then went to Nelson to hit some Downhill so we also had full face helmets and all our protective gear. The set-up we rode with was the lightest and most compact system I have managed to do so far in my bikepacking career. We had to also carry everything we required for our entire 24 day holiday due to flying out of two different airports so this included anything else required for an international holiday (like town clothes and noise cancelling headphones). But we didn’t require a tent (for the actual trail) so that helped and looking back on it – we probably could of survived without out mattresses too.