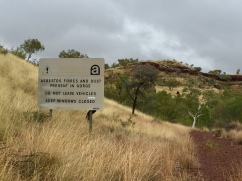 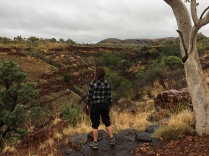 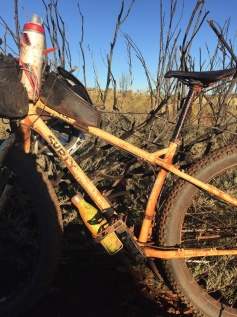 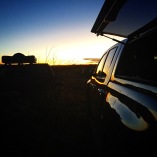 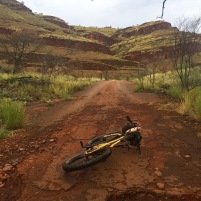 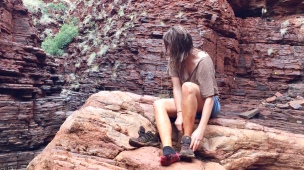 Bikepacking this area has its risks but the experience of cycling off the beaten track is well worth the effort.

I work in the Pilbara as a fly-in-fly-out Mine Electrician so every day of the three years I’ve been out here, I’ve been curious about cycling over the red dirt and around the spinifex plants (sharp spines that will stick straight through your skin to the bone). I’ve dreamt about following the dry creek beds towards the sheer drop gorges made with flat, multi-coloured  rocks stacked on top of each other. These strange looking rock faces spark the imagination on how the land would of been formed over millions of years.

The original plan was a solo bikepacking self-supported trip. Hutchy, a Mine Fitter on my crew, also keen for an adventure offered himself as support crew (and an excuse to drink beer under the stars). I figured I had proven my independence on my last trip – The Munda Biddi Trail (South of Perth) and I deserved a bit more of a “holiday” and company. We drove 1200km from Perth with Hutchy’s Hilux. We took my bike rack and camping equipment, worked our week long swing and then rather than flying home with the rest of the team – we headed out North-West towards the Park.

Our plans were very loose, both of us being experienced 4WDers, have quality camping gear allowing us to be self-sustainable and a good knowledge of the Western Australian Outback. What we hadn’t planned for, which made our trip even better and more interesting, was the unusual weather we got for this time of year. Dry seasons turned out to not be so dry and the gorges were actually closed for the first few days that we were there due to flood risk. This didn’t affect us too much because we spent most of our time on the Northern end of the park exploring and camping down the old Asbestos mine-site gorges that are technically always closed. The wet meant the asbestos hazard was less of an issue (or we told ourselves that). The rain also set up our expedition for some unique views. Both Hutchy and I have spent a lot of time in the Pilbara in the last few years but neither of us had seen the ranges covered in dense fog. We woke up the first few mornings completely surrounded by it that we couldn’t see past the Gazebo Awning posts that we slept under in our swags. It was eerie and felt as if anything could be out there!

I had decided I wanted to film the experience and with the couple of little gadgets I bought from JB Hifi (under $300), the footage came out so much better than expected. Make sure you watch our Bikepacking Karijini film on Youtube!

Length: About 1200Km driving around the park (not including the 1200km one way from Perth), numerous short day trips of cycling and hiking, lots of boiling up coffee and looking at the incredible views from our camp chairs.

Itinerary: I don’t like to plan any trip down to the nuts and bolts because I’m a bit more of a wanderer in my adventures. This is what we ended up doing-

Day 3: Drove to Karijini Visitor centre to meet up with Germans (friends I made on the Munda Biddi Trail), explored (cycled) Dales Gorge Rim Walk, Camped at Dales Campground

Day 5: Drove to Weano Gorge area and explored Hancock Gorge, Drove to Tom Price for supplies and fuel, drove to Wittenoom. Cycled from Wittenoom town to Wittenoom Mine site in Gorge. Camped at Wittenoom Gorge.

Day 7: Cycled back out to Wittenoom Town, drove to Hammersly Gorge then back around to Auski for fuel, then drove to Newman for dinner, then camped on Marble bar Road Sandy Creek (found on Wikicamps) ready to go to work in the morning (and have a shower before anyone saw us).

Abandoned Places: Wittenoom, built in the 1940s was closed in 1966 due to the health hazards of Asbestos mining. It is a ghost town in every sense of the word. It’s a cool place to visit with lots of boarded up houses and overgrown streets. There is obviously a few people (3 people as state on the last census) still living there because a couple houses we passed had nice manicured gardens and cars out the front. All the signage in the area has been taken down, probably to make it less appealing for tourists. The mine itself – when heading down the gorge, can be seen on satellite images but when we were there – it was overgrown concrete pads that you couldn’t see from a distance and some rusted metal tools/rubbish. We camped in this area because it was nice a flat surrounded by towering red rock ridges. I rode further into the gorge the next day and found beautiful swimming holes, incredible views (the best in the park) and a feeling of complete isolation and serenity. I ended up riding back to camp and convinced Hutchy to hike it and come for a swim (and wash some clothes).

Yampire Gorge Mine is a lot older and less evidence of humans besides the rough 4WD track and some warning signs. Great ride on the track, through multiple creek crossings and the scenery changing so dramatically as the gorge got narrower. Yampire Gorge mine is older than Wittenoom and Wikipedia tells a great tale involving mules, camels and explosives on how it was built and worked on.  I got back in the car as the signs got more explicit. It was pouring down and just past that final sign, we hit the flooded section and as we turned to go back, we blew a tyre. So both of us were outside the car anyway rubbing our shoulders into the dirt trying not to think about the specs of blue embedded into the ground while changing the tyre.

The Gorges: On this trip we explored Dales Gorge, Hancock Gorge and Hammersly Gorge. I have been to Karijini before so I didn’t feel the need to see it all again. I recommend adding an extra 3-5 days for touristing if you haven’t been up here before because these gorges aren’t something you want to miss! They are unlike anything you will have seen. My favourite (and why we made the detour so I could show Hutchy) – is Hancock Gorge. It’s a bit of a climb down, then you get to the “Spider Walk” (the name is the clue on how to get through this section) and then you hit Kermit’s Pool. Which I still have a picture on my bedside table from 8 years ago. Highly recommend. I also recommend the climb on Mt Bruce (the second highest mountain in WA).

Cost: Park fees are $13 a day per car  and when in the tourist side of the park you only have two options for campgrounds and that costs $11 per person a night. We camped once at Dales Campground and then all other nights were in the Asbestos gorges on the other side so did not require a fee. We may have stealth camped just outside of Mt Bruce and risked the $100 fine (which we didn’t get). Tom Price also has great camping areas. I also recommend camping at Albert Togolini Rest Area on Great Northern Hwy. It’s free and if you go deep enough (4WD required) – it is incredible. We could of stayed there a few days if we had the time.

Unsupported Options: The original plan was to ride unsupported but due to the weather and possible flooding I’m happy I had 4WD support. We only had 6 days to explore so it was great going for day rides but having the ability to drive to other areas. The original plan was to cycle through the gorges and zig zag across the park. The water level stopped me from being able to successfully get through the whole way – I’m not sure if this would have been different if Dry Season had stayed dry but I wouldn’t rely on being able to get through. I could of gone further with a waterproof set up, maybe a packraft and canyoning gear so you can wade through the water. I left the bike once to walk through the water further.

Asbestos: Absolutely a real risk. They closed an entire town (Wittenoom) because of the dangers. Signs everywhere and half way down Yampire Gorge it asks you to “not exit your vehicle”. We were happy it was a wet week so it kept the dust down. We could see it in the gorges, blue fibres plasted into the tracks and in Wittenoom Gorge – an impressive and scary pile of it, abandoned halfway through processing. If it was windy – we would of shot out of there as fast as we could.

Filming & Photos: We used our iPhone 7’s, a DJI Mobile 2 Gimbal and a Joby GorillaPod Tripod. I also use a QuadLock phone case for mounting onto my bike. Are you impressed with the quality of our iPhones?? The Gimbal (linked to our phones with Bluetooth) keeps the phone steady so much that the quality seems higher because it supresses micro shakes. It seems to have a mind of it’s own sometimes but I am so so happy with my purchase.

Mapping: I brought a indepth paper map of the area (ordered from Mapworld) and we both signed up for the Trial version of CycleMap on our phones. This gave us great satellite images (much better than Google) and the ability to use GPS location even out of reception via our iPhones. I couldn’t find anyone online that had bikepacked the way I intended to (off the roads and tracks) in this area so I wanted to have the ability to do anything and everything.

Supplies: The closest towns are Newman and Tom Price. You can also get fuel and a bite to eat at Auski/Munjina Roadhouse. There is no drinking water available in Karijini so make sure you bring some in from Newman or Tom Price (Auski only sells 1.5L bottles). We had a full 4WD set up. We slept in swags/Bivys underneath a gazebo awning. We also ate amazingly, I brought up my Engel fridge and double stove top and Hutchy brought up his WeberQ BBQ which allowed us to ‘get our chef on’ every night and cook up some fine feasts.

I brought everything I would of if I was bikepacking self-supported (just incase Hutchy left me to my own devices) so my  kit was similar to this Packing List . This with an addition of my new Sea to Summit Spark II sleeping bag (I was so overdue for an upgrade). I found that during the night, my ultralight sleep kit was much warmer and more comfortable than Hutchy’s old faithful Swag system. Technology is amazing! One thing we would pack for next time is an extra spare tyre.

For those who are interested – below is a rough list of what we packed for a good, safe time 4WDing in the Pilbara….